Welcome to our growing community! Included below are some links that will help if you are considering moving to the area:

County of GP No.1 Rural Living Guide to help you make an informed decision as you contemplate a move to the County of Grande Prairie.

City of Grande Prairie Relocation Guide is a great place to learn more about the City of GP and what goes on there.

DiscoverthePeaceCountry.com has lots of information about our hamlet too. Check it out for a little bit of history, photo gallery and current information about Bezanson and many other communities in the Peace Country!

Bezanson has a northern continental climate typical of northwestern Alberta and northeastern BC, classified as humid continental, bordering closely on a subarctic climate. Winters are generally very cold with some mild spells. Summers are pleasantly warm in the daytime, but nights can be cool despite the long summer days typical for its latitude. Many hot days over 30 °C are rare. Winter conditions can vary tremendously from year to year. Winters have been known to be mild enough to produce “brown Christmas” conditions, where little or no snow may fall until after Christmas due to unusually mild early winter conditions.

The average January temperature is −15 °C, while the average July temperature is 15.9 °C. However, temperatures as low as −52.2 °C and as high as 34.5 °C have been recorded. The area receives 447 millimetres of precipitation annually, including 318 millimetres of rain and 159 centimetres of snow. However, snowfall and rainfall amounts vary greatly from year to year. Being fairly close to the foothills of the Canadian Rockies, it can get quite windy in Bezanson, especially in the spring and fall. Chinooks may occur in and bring winter thaws to the Bezanson area. Bezanson has 314 days with measureable sunshine per year on average or about 46.2% of possible sunshine.

Summers can bring thunderstorms, although they are not as frequent nor as severe as those further south in Central Alberta. 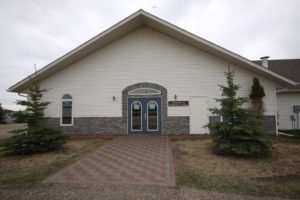