Cecil Evans – Unofficial Postmaster 1914-1915
The Grande Prairie Herald reported on May 26, 1914 that Cecil Evans was the FIRST Postmaster of the Bezanson Post Office that was opened at the Bezanson Townsite (NW 17-71-2-W6). His step-father, Sidney Webb had the contract as the mail courier. In July 1915, Cecil enlisted with the CEF. Private Cecil Evans was “Killed In Action” in France on September 15, 1916. His name is inscribed on the Vimy Memorial.

W.A. Leonard – Postmaster 1915-1916
W.A. Leonard was appointed Postmaster in December 1915 after Cecil Evans had enlisted. He operated the Post Office out of his store. Mr. Leonard resigned in June 1916. R.S.

McDonald – Postmaster 1917-1918
In January 1917, R.S. McDonald filled the position of Postmaster and operated the Post Office out of his store until June 1918.

Edith Morrison – Postmaster 1919-1921
Ken Morrison arrived in the area with his family in July 1918 and purchased a store at the Townsite from P.V. Croken. The store had been originally owned by Peterson & McDonald. Ken had his sister-inlaw, Minnie Bryenton, manage the store and his wife, Edith, was subsequently appointed as Postmaster in January 1919 – a position she kept until May 1921.

Francis Weighill – Postmaster – 1922-1923
Francis Weighill was appointed as Postmaster from May 1922 to January 1923 and operated the Post Office out of the vacated A.M. Bezanson house as the Morrison Store was in the process of being dismantled by the Weighill Brothers. Francis was the last Postmaster at the Bezanson Townsite.

Samuel Hunter – Postmaster 1924 – 1926
Bezanson was without a Postmaster for over a year until Sam Hunter was appointed to the position in April 1924 and operated the Post Office out of his home on NW 2-72-3-W6 until August 1926.

Pat & Lucie Rooney – Postmasters 1926-1946
Once Pat Rooney moved to the main road that provided service from Sturgeon Lake to Grande Prairie in 1926 and expressed an interest in opening a post office in his store, he was appointed Postmaster for the new enlarged area that saw the combination of Smoky River and Bezanson into one Postal District. Pat was appointed in December 1926 – a position he kept until 1931 at which time his wife, Lucie was appointed Postmaster. Lucie remained in that capacity until November 1946 when they sold their business. The Rooney’s moved to Grande Prairie and eventually retired in Kelowna. Lucie passed away in 1951, Pat in 1962. Both were buried at the Kelowna Cemetery.

Smoky River was the official name of a Postal District north of the current Hamlet of Bezanson within the County of Grande Prairie No. 1.

reading about the opportunities for land ownership in Northern Alberta as advertised by A.M. Bezanson. They arrived at Grande Prairie by train in May 1917 and Pat quickly found employment as a grocery clerk for Crummy Brothers. Although Pat had filed a homestead application on SE 34-72-3-W6 in 1919 in an area of Bezanson known as Lindsay, the family decided to remain in Grande Prairie until a suitable home could be built on the homestead. Once settled on the farm, the Rooney’s decided to open a store in their home. A Post Office was added in the Rooney home/store on June 6, 1923 with Patrick Rooney appointed as Postmaster.

By 1926, the Rooney’s realized they had outgrown their home. Instead of building on to the existing house/store, they decided to move three miles south to the main road that provided service from Sturgeon Lake to Grande Prairie. The new store with living quarters on the back was built from the logs of the Presbyterian Church that had been located at the Bezanson Townsite. The Smoky River Post Office District merged with the Bezanson Post Office District and the new enlarged area became known as Bezanson and operated out of Rooney’s Store.

Edith Field – Postmaster 1926 – 1927
Clarence and Edith Field, originally from Ohio, moved to Ponoko, Alberta in 1910 and then to Northern Alberta. Clarence filed a homestead application on NW 34-72-3- W6 in 1918 in an area of Bezanson known as Lindsay. Although the Field’s lived on the homestead along with Edith’s mother Sarah, Clarence opened a photography studio in Grande Prairie and drove back and forth every day.
Edith was appointed as “Postmaster” on July 12, 1926 with the departure of the Rooney’s from the area. Although there is no “resignation date” on the archived postal document, you would assume Edith operated the post office out of her home until the Smoky River Postal District closed in 1927. Clarence passed away in 1931 and was buried at the Glen Leslie Cemetery.

Truman & Hubert Manning – Acting Postmasters
(no record of formal appointment therefore dates unknown)
Hubert and Truman Manning, originally from Ontario, had been living in Saskatchewan when they decided to move to the Peace River District. They traveled by the Athabasca Trail in 1911 and Hubert filed a homestead application and Truman purchased 640 acres by means of South African Scrip on land in the Kleskun Hill area. It is written that the Mannings operated the Post Office in their residence on behalf of James Brims who had been appointed as the official Postmaster.

It was interesting to note that the Manning’s had ploughed two furrows from Crystal Creek to the Smoky River that eventually became Highway 43.

The Manning house was donated to the Kleskun Hill Museum by Elvin and Tillie Gordon. It has been completely restored and contains a “Mail Slot Box” that may or may not be original.

James Alexander Brims – Postmaster 1913 – 1915
The Kleskun Hill Post Office was established on May 15, 1913 with James Brims being appointed as “Postmaster”. James was originally from Scotland and arrived in the Peace River District in 1910 and subsequently filed a homestead application on SE 17-72-4-W6. He was on the land in March 1912. As he had served in the British army in the South African War and was still a reservist, he went back to England to once again join the British army when WWI commenced. It is assumed that in his absence, he had the Manning Brothers provide Postal Services for Kleskun Hill at the Manning residence.
Mr. Brims resigned on August 29, 1915.
After the war, James moved to Arizona due to his health. He married Alison Dick Cullen in Phoenix on September 14, 1921. They had one son. James passed away in Phoenix in 1951.

Thomas & Margaret Leslie and their 3 adult sons; Norman, Ed & Bruce, left Roslin, Ontario and arrived at Grande Prairie and filed homestead applications on land east of the town. They filed in such close proximity to each other that the area became known as “The Glen of the Leslie’s” which was later shortened to “Glen Leslie”.

A large two story log home was built on the Norman’s homestead (NW 25-72- 4-W6) and Thomas and Margaret also moved into the house. The home was on the Bezanson Townsite to Grande Prairie Trail and became a stopping place for many travelers. On July 1, 1914 a Post Office was established in Norman’s house and named “Glen Leslie”. Thomas Leslie was appointed Postmaster. He resigned on January 13, 1919.

Norman had enlisted in the Army in 1915 and was wounded and returned home in 1919. On June 30, 1920, Norman was appointed Postmaster – a position he kept until February 22, 1921 at which time he moved his family to Dimsdale to operate a store and Post Office. The Leslie’s later retired to Grande Prairie. Norman passed away in 1972 and Gladys in 1983. Both are buried at the Glen Leslie Cemetery.

Ken Morrison, who owned a store at the Bezanson Townsite, decided to dismantle the building and use the material to build a store on property (NW 36-71-4-W6) owned by his daughter and son-in-law, Dorothy and Ed Leslie. His sister-in-law, Minnie Bryenton was appointed Postmaster on July 28, 1922. Minnie decided to move to Calgary and resigned on March 22, 1928. Minnie, who had married Sam Turner, passed away in 1946 and is buried at the Glen Leslie Cemetery. 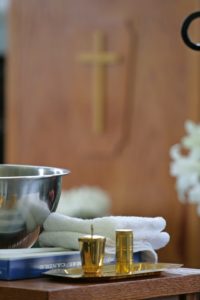